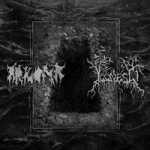 Are you ready for some Black Metal rage from Poland? Our Eastern neighbours have developed a very vivid scene for this kind of music over the last more than twenty years, including some very unhealthy bands, no denial! And two of the better known bands have teamed up for this release here. On the one hand we have ARKONA from Perzów, that are around since 1993 already. Five full length albums, two compilations and some split-releases mark their way on the battlefields of Black Metal. On this untitled split 7”, they present us the new song ‘Klucz Do Istnienia’ (translates as: Key To Being). Pure Black Metal is what ARKONA gives us here, including those typical cold guitars at hellish speed. Sounds like all clichés fulfilled? Yes, it is like that. Not bad at all, yet very uninspired and those unnatural sounding drums are quite annoying as well. I personally have found no reason to check out more from ARKONA here. Their partners in crime ILLNESS are definitely the better ones. Four albums are listed in their discography along with a few EPs and splits, but ‘Zaraza’ is exclusive to this release. This one starts off with very old fashioned and Thrash metalized riffing before the band’s name somehow becomes programmatic. It’s very ill stuff with sick vocals, spooky, even weird samples and surprising turns. Unique, fucked up stuff for the black hordes, so to say. Find out more at: www.facebook.com/arkonahorde, www.facebook.com/illnesshorde, or the label’s site: www.thirdeyetemple.com