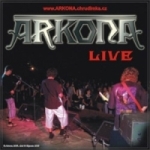 Victory in battle is the highest principle of every Pagan heart – but it seems that not all Pagan Metal bands are properly prepared for the heat of a live battle. A lot of bands are offering quite complex music on their records but during a live concert everything is falling apart. But the re-release of the ARKONA live album "Live… For the Glory" is showing once more the potential of one of the leading bands. The 11 songs had been recorded during a show in Moscow in late 2005 and the band is in the position to transfer all their passion, heart blood and atmosphere into nearly an hour of blood, sweat and tears. I can only pay my respect to the fact that even very traditional songs like ‘Tuman Jarom’ can be found on the playlist and especially songs like ‘Rus’ with a remarkable audience as background choir are the real highlights of this live album. The circle is now complete and Vic Records finally re-released the whole back catalogue of this really outstanding band. But the label has invested a lot of efforts to give every fan a real overview. You can find on the normal live album as small bonus the 2002 demo simply called "Russia" which is showing ARKONA’s music in a slightly different light. The three songs are all very familiar (can be found on their debut "Vozhrozhdenie") but the keys have a more mystique touch and the guitar work is more Heavy than Pagan Metal. Next to the normal album a bonus CD is offering the bands side project NARGATHROND with their 2004 release "Inevitability" which is more or less pure Gothic Metal next to German bands like EVEREVE or FLOWING TEARS. It’s a shame that the band is currently not in the position to perform live (their female singer Masha is working on a new pagan warrior generation) but this album is offering everything which old and new fans need to survive until the dawn of a new live battle. www.vicrecords.com, www.arkona-russia.com