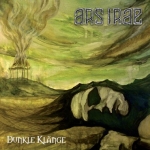 Formed back in 2004, this is the second album of this German band. All of their lyrics and album titles on their releases are done in German, giving them an approach to an essence usually found in Eastern European countries. Musically speaking, they are a blackened Death Metal band, and the lyrics are more of ancient tales and maybe some old history, rather than odes to a dark entity. Musically it reminds me of early DISSECTION with some other parts with an early ENSLAVED touch, although mostly done in mid tempo. And although in no way this can be called some kind of Folk Metal, for some reason some passages remind me of bands that are restricted to that style. It is a quite decent album on its own, but I am afraid it lacks something to reach a level where this can be of interest after listening to it for the first time. Some faster songs like ‘Herbst’ are good and prove they have the capability of doing something with dark musical passages and touches on brutality for some serious headbanging. The use of subtle melody is good, and it goes along with the title of the album of dark sounds. Still, at the end of the day I have the impression that something better could be done. More info at: www.facebook.com/arsiraemetal, http://arsirae.bandcamp.com, www.quality-steel.de