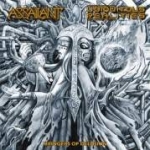 "Bringers Of Delusion" is an interesting split album from two really good Costarican bands, released by Symbol Of Domination Productions. ASSAILANT has been active since 2010. They also released a demo tape back in 2012. Their side of this split includes 4 songs. The first time I listened to this, it reminded me of DEATH ANGEL’s "The Ultra-Violence" with a little WATCHTOWER’s "Control And Resistance" thrown in. Maybe because the band plays a fast to mid-paced Thrash Metal with a lot of technical nuances. These guys came up with some well structured songs, full of catchy riffs and different rhythm patters. And I would highlight the scream-type vocals and those tasty leads. There is a lot of variation going on to keep things interesting. Maybe, the only thing that threw me off a little is the the acoustic part in ‘Suspension Of Disbelief’. Other than that, these guys are headed in the right direction and they have a lot of space to evolve and build on their specific style and identity. The production is heavy and organic, with a well rounded mix. So, it has all that raw, old school charm without sounding over processed or artificial. Great stuff overall! On the other side of "Bringers Of Delusion" we have UBIQUITOUS REALITIES. These guys started as NOTHINGARIAN in 2012 and back then, they caught my attention with a couple songs they had uploaded to YouTube. After some years of radio silence and a name change, this is their first official release, which also includes 4 songs. Nowadays, the band is a duo, with Sebastian on the drums and Hamid on guitars / bass / vocals. And I can say that they have taken their style to another level of brutality. Early SUFFOCATION comes to mind immediately. There are also some atmospheric parts that work really good as well. Brilliant guitar and drum performances with some deep growls and soaring leads. Actually, I was amazed by how clean the mix is, given that their music is so dense and maniacal. The production fits their style perfectly: huge, heavy and tight as fuck! Personally, I would ditch the pig squeals (don’t worry, these don’t happen too often), but other than that, this is top notch brutal and technical Death Metal. You can contact the bands on their respective Facebook pages: www.facebook.com/assailantcr, www.facebook.com/ubiquitousrealities. And you can get this split with their label here: www.satanath.com/sodp