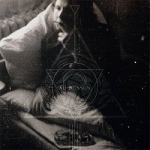 AU-DESSUS from Vilnius, Lithuania are a newcomer and have just released their first self-titled EP "Au-Dessus" via Witching Hour Productions from Poland, who once again show their good taste for underground bands. The five songs simply called ‘I’ to ‘V’ are Black Metal or Avangarde Black Metal / Post Black Metal on a very high creative level. Only active for one year, the band managed to write some really good songs within just a few months. Some of the members are also active in the Death Metal band EXILE INTO SUFFERY, so they make music on a professional level for quite a while now. Their vision of Black Metal is a really intense one and abducts the listener into a intense and dark world. The opening track ‘I’ is raw and fast Black Metal, not bad but not outstanding and as intense as for example the second track ‘II’, which starts slowly but intense with a long instrumental part, very depressed and menacing, with some ambient and doomed guitars, before harsh screams start leading the listener onto a dark path. Difficult to compare their sound to other bands, but older FORGOTTEN TOMB mixed with the Doom / Death era of KATATONIA or bands like FOSCOR are a good hint. But their sound is far more suffering and Black Metal painted.The sadness spreads out and creates a really menacing and intense atmosphere. These guys skilfully wander between the mentioned genres and create their own little bastard out of that. Track ‘III’ sounds a little influenced by melodic scandinavian Black Metal of the 90s and comes up with a nice melody line before getting more intense and sad, when the dark grunts appear and share the suffering with the listener. This track with some distance is the best one on this EP and really strong and outstanding. The last two tracks slow down the pace again and both live from doomed guitars and again come up with some Gothic / Doom-Death influences. All in all a very strong debut EP which makes me curious to follow the bands development and hopefully they will manage to create more material of that quality within the next months. Congratulations Witching Hour for the good taste. Check the band out at following locations: www.facebook.com/audessusabove, www.witchinghour.pl