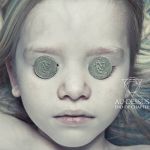 Strange that an album starts with a song number VI and goes on… well that is because from I to V are to be found in the previous EP done by this band from Lithuania. This full length and that EP, is all the band has created since their inception back in 2014. Their name means “Above”. For the cover art, song titles or band name, one can not probably think of what they play, which I must say is some sort of mixture between Post Rock and Black Metal, where the Black Metal part is still a lot stronger. Yet they do have very present the Post Rock influences, and also have a very good production to make everything a more atmospheric experience. The Black Metal parts are somewhat more reminiscent of progressive Black Metal sometimes reminding of ENSLAVED, and the later works of EMPEROR and at times to more refined DARKTHRONE. I am not a Post Rock connoisseur but I can relate them to what ANATHEMA does in their last albums and you can get an idea. And even with those things in mind, the band is very creative and are capable enough to create moods that even with the noisy Black Metal style fused in, they come out triumphant most of the times as they are always sounding dark. And for those who are into this kind of music, I am sure they will find another great band. Yes, there is that hypnotic feeling in some of the songs, drifting away a bit from the Post Rock influences with maybe a touch of industrial sound, but then they burst into a fast Death / Black Metal sounds like in ‘XI’ which I find to be the best song in this CD. After listening to this a few times, I found that the band is able to create that aura, that feeling that very few are capable of, besides doing it with a lot of passion, great musicianship and production. As for why the last song is also subtitled ‘End Of Chapter’ that remains a mystery… www.facebook.com/audessusabove, www.lesacteursdelombre.net