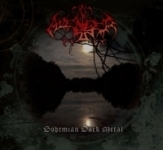 AVENGER is quite an underrated band, one of those purveyors of stable releases all making an imprint on the listener, leaving one in a vortex of darkness, after the music has stopped playing, not really knowing what to do and where to go, making one ending up pressing play again so the mesmerizing and enchanting darkness of AVENGER once again can create their world outside this world. A dark and freezing atmospheric blend of Black and Death Metal is what we get when we put on AVENGER. A blend that’ll hit you in the face as a awol train, a fierce and aggressive attack on the senses, without it being an senseless blitzkrieg of noise, thoughtfulness rules this sphere. The mix of bleak melancholia and brutal aggressivity is immense. With the base in good old Scandinavian Black Metal and the Eastern European scene we are getting swept away with freezing winds and moonlit seances, as it only can be found in such traditions. Good riffing, great melodies, subtle synth and bestial drumming together with the brutal vocal assault is making this album a winner. The songwriting isn’t that bad as well, it is actually quite strong and effective. The means of getting the song out in the face of the listener and enticing the curiosity all along the album, are present all the way through. "Bohemian Dark Metal" is yet a gem from AVENGER and a must for fans of this kind of music. Cold and blazing, fierce and aggressive, catching and enticing, this is how I like my metal delivered. It can be blasted as a brutal attack and it can be enjoyed in depth without without losing any of its forces. And the production is nice dark and powerful as well, a top notch album and my favorite of the year so far! Become shackled at: www.myspace.com/avengerofficial, www.deathgasm.com