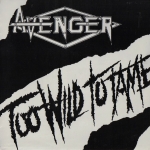 So, here we have a historic 7" from the first incarnation of AVENGER, from the time when Brian Ross of SATAN and BLITZKRIEG fame was in the band. It is in fact the final release with him singing, after just a demo and a split 12". The following two years would bring two impressive AVENGER albums, but by then with Ian Swift delivering in the vocal duties, he who had actually already sang in one of the SATAN demos. After this 7" the guitar player was also replaced, and in came Les Cheetham, who also played the VENOM 1985 US tour (together with Dave Irwin from FIST) when Mantas couldn’t make it. This new cardsleeve CD version brought by Skol Records (together with plenty more "official CD replicas of the original NWOBHM singles") is most welcome, as many of these items are hard to find. And this is a fabulous single. Melodic yet fast and heavy, with a strong production, and fine musicianship, with remarkable solos and the unmistakable voice of Brian Ross doing what he does best. Both songs are amazing Heavy Metal pieces from an early age. In fact, I find them somewhat more aggressive than most material they would go on to record for their LPs. This is most recommended, and indeed I advise you to check this out together with the aforementioned re-releases. There’s wonderful stuff there. See the list at www.skolrecords.com, and concerning AVENGER, you can keep track of any news at www.facebook.com/avengerukofficial