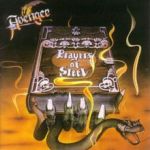 Once upon a time in 1983 in Herne, a little town close to Bochum and Dortmund in Germany, a band called AVENGER were created by 3 kids named Peter "Peavy" Wagner, who sings and plays bass, Jörg Michael who likes to play drums and Jochen Schröder who knew how to shred the six-stringer. Guitarists Alf Meyerratken and Thomas Grüning were also part of the band, and the latter went on to RAGE. They released their first album "Prayers Of Steel" in 1985 on Wishbone Records and later the same year the 12" EP "Depraved To Black". Though a blazing NWOBHM band were already shredding under the moniker AVENGER, and the Germans had to change name, first they wanted to call themselves FURIOUS RAGE, though they, perhaps wisely enough, shortened it to RAGE, a band who released their first album "Reign In Fear" on Noise Records in 1986, and the rest is history, as they say. Epic guitar-driven Heavy Metal with great focus on catchy melodic-lines, catchy vocal patters and great Rock’n’Roll rhythm patters which make the songs groove, the band had the skills for good songwriting from the very beginning, and it is hard not be caught in the inferno of great riffs, good melodies, great vocals and groovy drumming, if you like classic Heavy Metal, with a good touch of epic dimensions and sing along pieces. It is really great that "Prayers Of Steel" is widely available again, as it is one of the true gems of German Heavy Metal, that perhaps has drowned a tad, due to being released a bit too early, and wrong labels and of course being overlooked as RAGE took off on Noise Records, though now it is back, with a vengeance! The load of extra material on the album is also quite amazing, though we miss 3 demos, which means we are missing 5 tracks of the AVENGER demo history, which is a shame I think. We get the already mentioned 12" EP "Depraved To Black", which offers, back then, two new tracks and live versions of ‘Prayers Of Steel’ and ‘Faster Than Hell’, two quite ass kicking tracks from the full length. On top of that we get the bands two demos "Demo 1" and "Demo 2" from February and July 1984. We are though getting 2 of the missing 5 demo tracks during the studio rehearsal outtakes from 1984, which is actually quite well recorded, besides the last track ‘Assorted By Satan, which becomes a bit gritty, though that can be due to tape wear, as the rest of the outakes have a quite good sound. When knowing where the band has ended, it is quite easy to pick out, where the different elements in RAGE come from, as much already was quite evident here, on their first recordings. Peavy knew what he wanted, and where to go the first 10 years at least, or more, as you can hear on the track ‘Aborations’ that contains a lot of classic to modern RAGE elements, with both the guitar build-ups, broken beats in the chorus and the vocal-lines, quite amazing. A sure buy for fans of the German Heavy Metal legacy and fans of RAGE of course, and that logo of the band, damn, I like that style! Go fetch the record faster than hell or the sword made of steel will sever you in two, not even prayers of steel will stop the rise of the creature by halloween, ready to conquer the battlefield assorted by satan, with adoration from the south cross union. Rage on here: www.rage-official.com, www.facebook.com/rageofficialband