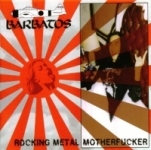 Tora! Tora! Tora! This is already the second shabu – fueled kamikaze attack of the ABIGAIL side project BARBATOS (which also features a japanese WW II fighter plane in its logo, by the way) lead by – yes, main man Barbatos. For the porpose of recording this slab of dirty 1 – 2 – 3 – GO! Metal / Punk he has been helped by friends from the Japanese Black / Death Metal scene who did quite a good job capturing a beer smelling "Fuck Off!" attitude spreading a rocking MOTÖRHEAD / VENOM – ish feeling. The topics of the lyrics which have been cotributed by members of DECAYED, BLASPHEMY, BESTIAL MOCKERY and others cover the eternal classics: war and sex, hehe. This is also reflected by the layout of the booklet which shows pictures of young "ladies" opening their mouths wide for the final cumshot ("One Shot! One Kill!", so to say) blended together with photographs from WW II. So, if you are a "Rocking Metal Motherfucker" and enjoy the likes of SCEPTER (is the resemblance between the title of this record and the latest offering of the Chigaco – sickos just coincidence?), ROK, or GEHENNAH grab yourself a ‘Satanik Beer’, ‘Drink Till Death’, watch an ‘Erotic Dancer’, preferably a ‘Red Leather Bitch’ – but ‘Blonde And Bitch’ would also do – and go for ‘Hot Sex!’. So, this is surely nothing for people overly concerned with aesthetics or philosophy but for intoxicated fiends, got that?! I have to confess: My ‘Dick Is Fucking Big’, ‘I Love To Eat Pussy’ and I really enjoyed this dose of ‘Sexual Alcohol Metal’! BARBATOS email contact: suzuyasu@js8.so-net.ne.jp. Homepage: www.displeasedrecords.com/bandpages/barbatos.php (rather uninformative, you may also want to check http://hrefhead.tripod.com/barbatos.html which is an interview conducted after the first CD "War! Speed And Power" released on ISO 666). BANZAI!!! 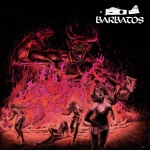 “Pass me a F#$%&! BEER, let’s break in a house and see if we can get some chicks”. BARBATOS is all about party and destruction, and this album is an anthem to it. Remember the days when you were getting wasted with your friends, listening to loud music in the car while driving, usually listening to JUDAS PRIEST, VENOM, MOTÖRHEAD, DRI and some Punk tunes from GG ALLIN and MISFITS. This is the kind of stuff that will put you to bang your head non-stop. As in all the BARBATOS records, this band is the brainchild of Yasuyuki Suzuki and while in other albums he handles everything (guitars, bass, drums, vocals) in this particular record he asked for some help from other musicians and that’s a key point here, because I think do to that matter the album sounds a bit more focused than their other releases, as if everyone was literally partying inside the studio while recording this album. Now this is not a “breaking boundaries” record, on the contrary this is a tribute record, to all the Punk, Hardcore, Thrash, Crossover, Black Metal, that was put out in the late 80s – early 90s era and that every single one of us have listened a track or two when hanging out with older friends at bars and crashing houses. Fast destructive music, that way we like it, the way we drink it, the way we live it. For more information check out: www.facebook.com/pages/abigailbarbatos/208365735859610, www.areadeathproductions.com