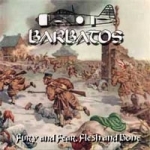 I really have no idea how many BARBATOS demos, albums, EPs and split-releases are out there by now, but it must be quite many already from what I constantly notice in various mailorder lists. So, it seems that mainman Yasuyuki has a lot of spartime to kill and / or is not fully streched with his main band ABIGAIL. From what I understand there’s no steady BARBATOS line-up and all of his recordings are done with the help of musicians he’s friends with. That’s why members of DECAYED, BESTIAL MOCKERY, BLASPHEMY, FROSTMOON ECLIPSE, HAWKMOON, INFERNAL (Colombia) and also Shaxul and Khaos from Legion of Death Records were already part of the “band”. With his newest release, the full length “Fury And Fear, Flesh And Bone”, we can add Chuck Keller (ex – ORDER FROM CHAOS, VULPECULA, ARES KINGDOM) and Joel Grind (TOXIC HOLOCAUST) to the list, while his ABIGAIL partner in crime Youhei plays drums on the whole disc. Musically the 14 songs (plus a very special “hidden” bonus track) could be labeled as straight ahead, punky old school blackened death-thrashin’ Speed Metal (or something like that), kinda like a mixture of the raw BATHORY creations (of the first albums) mixed with early SODOM and the chaotic attitude of classic VENOM plus some little NWOBHM overtones here and there. The lyrical topics vary between hilarious (‘Satanik Beer’, ‘I Love To Eat Pussy’, ‘Dick Is Fucking Big’ etc.) and war related (the cover luckily features a scene related to the latter)… The flow of the whole album unfortunately suffers a little bit from the three different sounding recording sessions that were used for it, but that’s pretty obvious if you combine different line-ups / recordings onto one disc. Lyrics, guitar and vocals on the first five songs were contributed by Chuck Keller, while on tracks six to ten Joel Grind takes over the mike. And tracks 11 to 14 originally appeared on a previously unreleased demo from 2000 (“Bloody Fucking War!”) and therefore are soundwise the worst on offer here. The biggest suprise comes in the aforementioned “hidden” track, which is a very authentic and welldone version of SODOM’s ‘Outbreak Of Evil’ (don’t know who played on that one though)… So, all in all this is pretty much another love it or hate it release – essential for all the BARBATOS worshippers, but probably not of interest for the modern “Metal” generation. It’s raw, simple, straight forward, old school and destined to accompany your next drinking session, so decide for yourselves. Label contact: www.agoniarecords.com