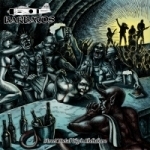 This is a special live document, both rare and rabid. BARBATOS is a one man project, run by Yasuyuki Suzuki of ABIGAIL. We all know that Japanese bands tend to be extreme and very simple, yet effective. Mr. Suzuki stands in this line perfectly. What we have here is a recording of BARBATOS from a show they played in 2009 in front of a Punk crowd. Yasuki was supported by no less than three guitar players, one of them originally from Japanese Crust-Punks FRAMTID. Since these recordings don’t sound overdubbed or even remixed at all, this means sheer energy and a raw performance. Listening to the ten songs on "Street Metal Gig In Ikeburkuro", I often thought of the great live record BEWITCHED released more than a decade ago… Blackened Thrash, unfiltered, unpolished and unhindered by too much technical skills – isn’t that the root of all the evil we like? Imagine a distinct crusty Punk vibe and overexcited vokills added to this and you should have an idea how this furious stuff might sound. This is definetly another case of a band that will never re-invent the wheel, but sounds a hundered times better and is a thousand times more fun than those who try and fail. If you’re interested, be quick! "Street Metal Gig In Ikeburkuro" is limited to just 1000 copies and includes an A1 poster. For further info, check: www.myspace.com/barbatosjapan or the label site: http://adp.areadeath.net.