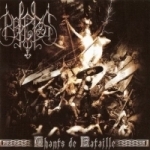 For some reasons, this album reminds me on the mid-90s, when bands like OPETH were not afraid to experiment new facets of extreme Metal. I doubt it was the reference BELENOS had in mind when they composed the music for “Chants De Bataille”, but I can’t help it, the first bars of the first track following the intro catapulted me back in time. It is as if BELENOS have combined the epic Black Metal sound with the melodic Death Metal the Gothenburg area was made famous for. Saying this, I stay perfectly conscious that BELENOS’ main inspiration lies certainly more in the epic BATHORY tradition, at least lyric-wise (their label describes the music as” brutal pagan Dark Metal”, and rightly so), but the overall atmosphere, the supreme elegance of the music, the highly developed musical skills on display here evoke far more than simple Viking (or Celtic in the BELENOS case) stances and poses. Each track appears perfectly crafted, all the details are obviously carefully planned to come up with a true work of art. Band leader Loïc Cellier (presently the sole BELENOS member and who relocated himself in Brittany in pursuit of his dreams) demonstrates here how much talent he has. This man surely has a vision, and tenacity enough to keep his project on track against all odds (previous label capsizing, numerous line-up changes). BELENOS’ music is apparently very simple, but this is only illusion. Brutal (yet delicate) tracks are balanced by short atmospheric and powerful interludes. The vocals (the lyrics are in French) never verge towards the ridicule so often observed in the Pagan Metal field, the clear voice is never too polished, the screams stay in the normal range, Loïc doesn’t overdo anything in order to produce a perfect album which is not marred by even the most minuscule faute de goût. I realize now how much the cult status BELENOS forged themselves in the French underground is rightly deserved. Few bands of now can combine a pure traditional Metal spirit with fresh ideas, “Chants De Bataille” sounds sometimes like a Black Metal album but it is not really Black Metal, some Folk overtones can be discerned, but they are actually a recreation from scratch, not a lame patch of things heard before and like I said the “folkish” elements are as powerful as the extreme tracks. Sorry if I appear a little confused and confusing here, but it is very difficult to describe originality, isn’t it? If you need Metal music which challenges your mind and soul, you have to get this album. You will not get silly keyboards and trebly female voices, but a real epic music. Essential pure Metal! www.belenos.biz.