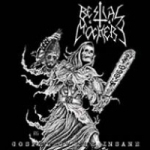 Even if BESTIAL MOCKERY’s previous effort was immensely enjoyable, you can forget about it now, so much this Swedish unholy horde comes back with a 100% better release. The band progressed in every departments and now stands as a sure value in the very crowded Death / Black Metal field. BESTIAL MOCKERY have maintained the originality of their music (difficult to categorize, of course for the better), only this time the sound, the musicianship, the composition skills give the impression of a more mature band. On this album, the vocal work is absolutely phenomenal, a very commendable performance by Master Motorsag indeed! Music wise, the band have managed to come up with a synthesis of Australian War Metal, primitive German Thrash and Scandinavian Black Metal, offering in the end a very personal music, even if the whole sounds familiar at first hearing (fear not, no trace of silly experimentations here, only pure Death / Black / Thrash!). The BESTIAL dudes didn’t resist including a chainsaw as a musical instrument (their own sonic signature) but only briefly on two tracks. Let’s say that the "fun" aspect discernable on the previous effort has almost totally disappeared in favour of a more controlled delivery. Even the production, fat and "groovy", adds a lot to the charm of the disc. To give you a rather fair approximation of the BESTIAL MOCKERY music, let’s imagine a mix of SADISTIK EXECUTION, ANGEL CORPSE, with a bit of DESTRUCTION and a pinch of ENTHRONED for good measure. Promising? You bet! I can assure that this album is a bowl of fresh air considering the ridiculously amount of crappy "extreme" albums flooding the market now. The only (minor) criticism I have here concerns the too predictable Chris Moyen cover art (Chris is obviously a superb artist, but he has to renew his style in my modest opinion). As usual, I realize how much it is difficult to share one’s feeling about an almost perfect album (it is far easier to slag than to praise). Anyway, do yourselves a favour a buy this remarkable record. BESTIAL MOCKERY are here to stay, thanks them for the great music! http://bestialmockery.cjb.net.