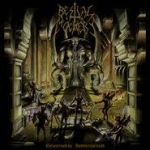 Hell’s Headbangers presents us a re-release of “Christcrushing Hammerchainsaw”, the first full-length in the impressive discography of Swedish necroblasphemers BESTIAL MOCKERY. Originally released in 2002 by Metal Blood Music, this crushing and provocative Black / Thrash inferno was long time out of print untill now! Fans who prefer vinyl should able to forfill their need as this one also comes as a 12″ gatefold LP (available from May this year) with an 8-page booklet featuring lyrics and bandphotos or picture disc (don’t know any details about this version). Also new is the redone coloured artwork by Chris Moyen. I don’t know if it’s the same deal in other music genres but it’s great to see releases this extreme and filthy treated with so much passion and dedication and therefore coming in such great shapes! I guess most of you are familiar with the style this late chainsaw loving demons unleashed. If not, Eduoard Vergriete gave a pin-point precise description when reviewing their “Gospel Of The Insane” album. Absolutely nothing I have to add to this, besides that this “Christcrushing Hammerchainsaw” is the BESTIAL MOCKERY album that overally pleased me most. None are bad, but this one feels filthier, catchier and less demented than their following efforts. Fans of NIFELHEIM, old DESTROYER 666 will probably get high on “Christcrushing Hammerchainsaw”, but also fans of old MARDUK, SADISTIK EXEKUTION, ENTHRONED, old IMPALED NAZARENE could find a gem in this one as well. It carries some ancient spirits! Check www.hellsheadbangers.com for info and prices.