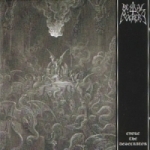 With bands like BESTIAL MOCKERY in their roster, the future shines bright for Osmose Productions I can tell you. This Swedish outfit dedicate themselves to a form of Black / Death very reminiscent of the 80s, but without playing the too wellknown card of a "retro" musical statement. The three individuals forming BESTIAL MOCKERY are certainly big fans of the scene of old, but listening to "Evoke The Desecrator" also confirms they have found a style of their own. It is consequently difficult to connect BESTIAL MOCKERY’s music with another band. The chaotic song structures are very personal, the band digested their influences (SLAYER, POSSESSED, KREATOR and SODOM mainly I guess) to render out an exciting and above all authentic Metal record. The sound that comes out the speakers is good enough, but not too polished, and sometimes evokes the shadow of the once extraordinary SLAYER, especially in the guitar department. BESTIAL MOCKERY have retained a nordic Metal core to their music only as a reminder of their geographic origin. This album can suit the record collection of ageing metalheads (like me) while I suppose the youngsters will stick with their DIMMU BORGIR or CRADLE OF FILTH albums I suppose. The only band I can equate this one with is DESTROYER 666, even if find BESTIAL MOCKERY far more attractive musically. A very interesting band and a strongly recommended album, that’s for sure.