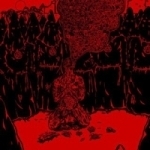 Formed in 2008 as SHAPELESS and turning into BEYOND in 2010 (can I trust you there, dear Encyclopedia Metallum?), this German Death Metal commando released a demo last year which is now followed up by the highly recommended “Enter Transcendence” 7” EP via Iron Bonehead. Two tracks of absolutely crushing Death Metal in the vein of MASSACRA, MUTILATED (France), NECROVORE, POSSESSED, GROTESQUE is what the quartet unleashes and its barbaric intensity immediately caught my attention. It blasts, it thrashes, it vomits forth aggression and sounds simply perfect with a good dose of reverb on the leads, the latter sounding immensely improved compared to the demo in terms of viciousness and impact. Furthermore, BEYOND increased the tempo significantly, the songs come across more compact and energetic and the production by Patrick / Temple Of Disharmony perfectly rounds off this rather short but definitely beyond sweet EP. Along with ALCHEMYST, HATESPAWN, VENENUM this is for sure one of the finest younger acts from Germany’s strengthening Death Metal scene and rips all the lame AUTOPSY, ASPHYX or INCANTATION-clones out there to f**king shreds!!! Sure, it’s also rooted deeply in traditional elements yet it taps less usual inspirations and thus proves so refreshingly different and bursting with power that “Death Metal’s ruling territories” America and Scandinavia should feel ashamed for hardly delivering any newer band of such incredible potential and ferocity. Killer! www.ironbonehead.de