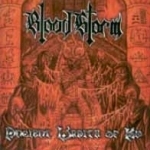 I was really looking forward to this album as I really enjoyed BLOOD STORM’s previous release “Pestilence From The Dragonstar” quite a lot (see review on top of this). Compared to its predecessor “Ancient Wraith Of KU” not only has a way better coverart, it also sounds a lot more Thrash inspired and old school than ever before. But unlike many retro acts (which BLOOD STORM are definitely NOT!), these guys quite obviously know what they’re doing and therefore easily convince with it. UK’s Terrorizer magazine did name early FROST / HELLHAMMER and SODOM as comparisons a while ago, which (in combination with the still very much present Black Metal elements) already hits the nail on its head quite precisely. It’s quite funny, in ‘Kmo A’Ajei Virus’ the vocals even remind me on Germany’s WARHAMMER (according to the booklet, a band that BLOOD STORM really admires), while the material on “Ancient Wraith Of KU” (despite all those old influences) generally is still a lot more intense and Black Metal influenced. The overall musical attitude of the band could easily be labeled as totally raw and uncompromising Metal in its purest form. What I really like about this album is the honesty in the production. Haven’t heard an album with a drumsound that sounds so real and non-faky than this. Even though there’s only 9 songs mentioned on the back of the CD, there’s a lot of intros in between, as well as a (unfortunately not very well executed) cover of the old SLAUGHTER classic ‘The Curse’, which results in a total of 16 tracks in the display of your CD player. So, all in all this album was worth the wait and will hopefully bring the band a step further in their career. If you should have trouble in finding a copy, feel free to contact the label directly through their website: www.metalwarprod.com