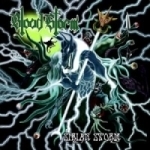 BLOOD STORM may be a quite unknown name for a big portion of the scene since this US outfit doesn’t seem to be interested in press-exposure too much. On the other hand, they might be interested in the old school way of spreading the word, meaning snail mail, paper printed zines, etc. Why do I bother to mention all this? Well, just to let you know how hard it is to come across their great stuff. They don’t even have a fucking website or even email address (well… they have email – Frank)! This band is definitely not a bunch of newcomers to the underground scene. It was put together by Mezzadurus (aka Chris Gamble, ex-GOREAPHOBIA) so you can only expect quality stuff from them. The first time I crossed paths with them was when their debut album “The Atlantean Wardragon” was released, leaving me surprised by their sheer intensity and untamed underground feel. What we have here is pure Black / Thrash Metal, never reaching the blastbeat speed evoking the old gods like CELTIC FROST, KREATOR (old), HELLHAMMER, NECROVORE to name a few… Personally I must say that this is one of the best productions I’ve ever witnessed in a Black Metal album… fucking raw but cleverly clear and enjoyable. This is the living example of how Black Metal should sound without falling in the the-more-shit-we-sound-the-more-cult-we-are heap. One may complain about a little bit more of variation between the songs but if you are looking for 50 riffs per song with no feel at all BLOOD STORM will be the wrong choice… they give it to you nasty, heavy and definitely straight to the point… Blackened art in its purest form!