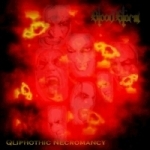 This (compilation) release leaves a lot to be desired, I’m afraid. You may blame it on the in-experience of a rather young company, but hey, the whole turnout still sucks neverthess… First of all, the copy that I have here seems to be a CD-R instead of a factory pressed “real” CD. Ok, I got my disc for free, so I should better not complain, but if it’s being sold this way as well, I just hope it does at least for a fair price… Then there’s the packaging, which is extremely poor to say the least. The quality of the frontcover is kinda blurry (almost like a bad color copy) and there’s no booklet at all. Not even a folded piece (the minimum you usually get these days). Just the cover and on its backside you’ll find some information. Well, “information” is not exactly the right word here either as there’s only some general bla-bla about BLOOD STORM as well as the songwriting-, production- and art direction credits… The necessary details about the featured material you’ll find on the traycard (on the CD backside), but even those are rather poor. There’s just talk about “non album demos and remixes” (addressed to the first five songs), nothing more. The remaining four cuts have been taken from the albums “Pestilence From The Dragonstar” and “Ancient Wraith Of Ku”. There’s a mistake in the running order (track three, ‘The Atlantean Wardragon’ and four, ‘Iron Flames Of Battle’ have been mixed up), a spelling error in the title ‘Possession By The Ku’ (“possession” lacks one ‘s’) and the volume level of the demo songs is different. “This album has been digitally remastered for the best possible sound quality…” Well, obviously not really. I don’t really understand the purpose of this release anyway. I mean, the diehard BLOOD STORM fans already own the regular albums anyway (while everyone else will get the chance to go for the re-releases rather soon), so why not going for a complete demo collection instead? Nothing wrong with the material on offer here. I totally like the violently performed, barbaric and hateful Black Metal of these guys (best reflected in the raw produced “Pestilence From The Dragonstar” material), but this disc here is kinda superfluous, sorry! For more info check out www.mcbtv.net