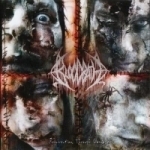 I still remember BLOODBATH’s "Breeding Death" debut EP (2000) very well, a great mixture between Swedish and American old school Death Metal that really was a bright spot at that time. Now the murderous Swedish Metal allstar-bunch featuring Dan Swanö (EDGE OF SANITY, INFESTDEAD, drums), Jonas Renske (KATATONIA, bass), Anders Nyström (KATATONIA, guitar) and last but not least vocalist Mikael Akerfeldt (OPETH) has completed its long anticipated full-length CD and it does not differ much from the material on "Breeding Death". The guitar sound is indeed very Swedish and imitates Sunlight quite well, the drums pound relentless, but are a bit clinical produced. Akerfeldt’s vocal performance is very good and sometimes reminds me of newer DEICIDE, CANNIBAL CORPSE as well as old GRAVE, what I do not like about the vocals is that they applied a few effects (fading sounds, short distortions etc) on them, which seem a bit pseudo-modern and do not fit to the overall great traditional Death Metal feeling, that dominates "Ressurection Through Carnage". Some drum sounds were changed in that way as well, but that happens only 3 or 4 short times on the whole CD. The problem I have with this effects is that they simply do not fit, sound fucking awful and should have been left out!!! But except this real small point of criticism "Resurrection Through Carnage" is a very good album, that definitely will not change the Death Metal world, because this kind of old school approach is not very new these days, there are in fact many bands that return to or copy the Ancient Death Metal style and many fail in their miserable attempts. But BLOODBATH convince me with songs like the melodic ‘The Soulcollector’, the fantastic opener ‘Ways To The Grave’ or the catchy, one and only mid-tempo track on the album – ‘Like Fire’, they all are best examples for an extraordinary songwriting talent the BLOODBATH members have and it is great that they use it to create some cool Death Metal tunes and not only for that wimpy, atmospheric and melancholic stuff they play in their main-acts. Good job! If you like to check out the band’s website, use this link: www.bloodbath.biz