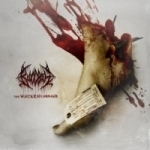 It didn’t took me very long to get bored by various subgenres in extreme Metal as a result of the ridiculous release overkill… Melodic Death Metal, raw Black Metal, symphonic Black Metal, brutal US style Death Metal… record companies always flooded the market very quickly whenever a certain style turned into the "flavor of the month". That was also the case with the typical Swedish old school Death Metal of course, a style that NIHILIST / ENTOMBED, CARNAGE and DISMEMBER established back in the 90s. For some reason I never got bored by the latter though and always enjoyed the majority of the releases that – let’s be perfectly honest here – all more or less sounded pretty much alike. Sweden’s BLOODBATH is a perfect example for that. They totally lack in originality, yet deliver a very solid, technically extremely well executed dose of straight ahead Swedish old school Death and are definitely my favorites from all the current "retro" SweDeath acts! Due to the fact that all involved members gained lots of experiences in other Swedish bands already (OPETH, KATATONIA, DIABOLICAL MASQUERADE, BEWITCHED, WITCHERY, NIFELHEIM and EDGE OF SANITY… to name just the most important here), this shouldn’t really be such a big surprise. "The Wacken Carnage" (recorded at 2005’s edition of the Wacken festival) is not only BLOODBATH’s first live album, it was also their first live gig ever. And the result is still very impressive! The sound quality is extremely cool and the setlist comprises of 12 powerfully performed tracks from all their releases up to that point (the "Breeding Death" mini CD as well as both full lengths "Resurrection Through Carnage" and "Nightmares Made Flesh"). I was a little surprised though that most of the songs (that they played that particular day) are from "Nightmares Made Flesh", the only release they did with Peter Tägtgren instead of Mikael Akerfeldt on vocals. But when you hear the songs in these versions here, it’s pretty obvious that Mr.Akerfeldt is without a doubt the far better vocalist anyway. So, it’s good to see him back in the line-up again. All in all a very enjoyable release, that furthermore got packaged very well (a cool digibook, incl. a booklet that has individual live shots of each member as well as all the lyrics) and a bonus DVD that also delivers the visual part of the same performance. Great one! For more info go check out www.peaceville.com