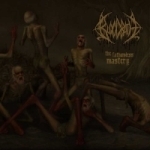 I can’t help but think fans of ORIGIN and BEHEMOTH won’t experience any difficulty connecting with this, and fans of less showy Death Metal will hate it to their dying days. That’s the sort of album BLOODBATH have released. They’re slowly becoming what GORGUTS and CRYPTOPSY were for people in the early 1990s. A band that obviously knows its Death Metal, and can play with a vengeance. Somehow, that all gets overshadowed under the almost too perfect production, and speed driven licks that serve no purpose except ornamentation. We’ve suffered long enough with bands that only play to flaunt their talent. BLOODBATH are not that far gone, but they could go there easily, and the awful Nu-Metal riffs in track three aren’t a promising indicator for the future. Of course, that’s not the entire album, and BLOODBATH have always stayed true enough. Perhaps not as true as some fans would like, but when has pleasing that crowd ever been easy? There is at least one thing for any fan to enjoy. There’s DISMEMBER linearity, MORBID ANGEL squeaks, and SLAYER speed. Enjoy, maniacs. http://bloodbath.biz, www.myspace.com/bloodbathband.