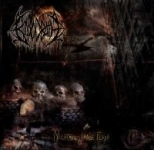 Here it is… probably one of the most eagerly and most anticipated Death Metal albums of the year 2004: the Swedish cadaver worshippers BLOODBATH’s new album titled “Nightmares Made Flesh”, I mean. First off, I guess it needs to be mentioned as for starters that the core line-up of the band has remained almost the same. The only changes on this new album are that Mike Åkerfeldt has stepped aside from the BLOODBATH line-up, at least for now, and he has been replaced by Peter Tägtren from HYPOCRISY for vocals. Also, Dan Swanö has only concentrated on playing guitar on this new record and left his previous job with the drum parts to a new BLOODBATH -dude Martin “Axe” Axenrot (also in both WITCHERY and SATANIC SLAUGHTER). So the question is, have these tiny line-up changes somehow affected BLOODBATH’s new songs on “Nightmares Made Flesh”? Well, if you liked what they did on their debut record “Resurrection Through Carnage” and hoped the guys would have stayed loyal to some of those ‘retro’ – Death Metal sounds they had managed to capture into that excellent album, then you can unfortunately prepare for a slight disappointment because “Nightmares Made Flesh” is actually quite drastically different album content-wise compared to “Resurrection…”. Gone is the band’s familiar Carnage / Nihilist / Dismember – worshipping that they had on “Resurrection…”, and you can hardly mention the word ‘retro’ any longer when talking about BLOODBATH in 2004 Anno Bastardi. The band has peeled their old school Death Metal sound off almost totally that they had like two years ago or so, and developed their style toward something that is far more technical and even progressive compared to anything they have done earlier. BLOODBATH that you probably knew so well and remembered raging through a fine set of songs in some sort of a ‘retro’ spirit of an old school Death Metal in 2002, isn’t the same BLOODBATH in 2004 anymore musically. That’s the cold fact that should be accepted by every old BLOODBATH fan once they intend to buy the band’s 2nd full-length ‘coz it’s kinda different indeed content-wise. And even more hard facts. In spite of BLOODBATH camp’s change of style, it can be stated “Nightmares Made Flesh” is a damn good and well-made Death Metal album with a more technical and a bit progressive Death Metal approach as I just mentioned earlier above. Peter Tägtren ‘luckily’ sounds a very different dude behind a microphone compared to what he does vocally in his main band HYPOCRISY. He actually sounds angrier, more evil and more vicious than in HYPOCRISY, so I think I have no right to complain even. Of course some of his typical, lengthened screams that he has always been sowing around in some HYPOCRISY songs, are a part his vocal style in BLOODBATH as well. Even if Mike Äkerfeldt sounded absolutely convincing on BLOODBATH’s previous album, I can hardly say Peter sounds any worse or less entertaining compared to Mike on this BLOODBATH’s follow-up record. He does sound fuckin’ good and that’s the only thing that matters to me. The songs have got actually much more variation and a varied amount of different nuances than before that some of you may not consider as that good sign in the first place at all if you just happened to be a fan of their rawer and more brutal old school Death Metal style they had incorporated very successfully into the songs on the “Resurrection…” album. But the bottom line is, however, that “Nightmares Made Flesh” introduces BLOODBATH with a very different sound which, as I have got a few reasons to believe, will be eventually accepted by many of you. In my opinion the album’s most kick-ass stuff comes in a form of such songs as ‘Cancer Of The Souls’ (SSHITT..!! Now this IS a fuckin’ awesome opener – HELL YEAH!), ‘Brave New Hell’, ‘Soul Evisceration’ (this particular song managed to give me a good and long-lasting boner – and I just don’t know why that happened?!), ‘Outnumbering The Day’ (and so did this, huh!) and ‘Eaten’ which is one of the heaviest fuckers BLOODBATH have penned down thus far with some downright crawling monster-riffs, gloomy atmospheres, totally brilliant solos, etc. I cannot ask for more… So what have we got in our hands as summa summarum? Well, if a well-crafted and damn skillfully performed Death Metal means anything in your world of brutal, heavy, raw and crispy Metal, then by all means go and buy the album even if “Nightmares…” isn’t any well-calculated sequel to BLOODBATH’s very successful full-length debut album. You’ll hardly regret if you do just like I told you to do – count on my words this time at least.