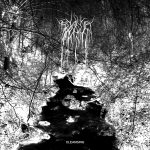 Somber Funeral Doom from Portugal, is what this longliving one man band is offering. “Cleansing” is the band’s fourth full length album. Slow and churning riffs, simple rhythm patters, perhaps a tad too simple here and there, as the music more or less stands still, without expressing much. It is as the atmosphere isn’t being followed through in all moments. Once in a while it works really well, and the listener is drawn into the universe of BOSQUE, at other times the dark, sorrowful, eerie atmosphere disappears for a hollow nothingness, which I don’t think is fully intended. I’ve been listening to some of the older recordings from the band, which are more raw and straight forward, and in my ears, that works better, than the a tad laid back atmosphere and progression this new album has. A tad too much chanting and stretced power chords, without a dooming, in your face, rhythm part or gripping vocals. I am drawn in by the first track ‘Movement’ though losing more and more interest as the album progresses. I’ve heard better and more solid from BOSQUE. More info at: www.facebook.com/bosquedoom, www.dunkelheit-produktionen.de