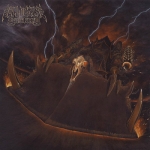 It’s two years ago that the German BULLDOZING BASTARD unleashed their debut album “Bulldozing The Vatican” onto the masses. Well, maybe not the masses, since this album was released by tiny companies. Now the Westphalians are back with a second full length strike. Drum destructor Barrage Beast left the band as a full member, but still plays live with them, so guitar player Genözider took over drum duties as well while still sharing vocal duties with bass player Irön Commander. The core duo of BULLDOZING BASTARD had the opportunity to exceed their furious first album, this fucking bastard of raw Thrash Metal, old fashioned Black Metal and rude Punk. But “Under The Ram” takes a different path. This album shows a band that on the one hand has matured, but on the other hand still is true to their roots. The sound once again is far from polished, yet it’s the middle finger high in the air that’s missing here, this pissed off Punk attitude. Instead, BULLDOZING BASTARD have added a very healthy dose of classic Metal influences. Especially the New Wave Of British Heavy Metal left its mark on “Under The Ram”. Just listen to ‘Alleys Of The Underground’ – this one is pure NWOBHM worship! And it’s good at what it is, no doubt. The band that I am reminded of here very much is the mighty TANK. The opening slasher ‘Queen Of The Night’ definitely has this flair, alike the simple following tune ‘Tornado’ with its cool guitar solo. And the final ‘Once The Dust Hast Settled’ is the best TANK song that them veterans forgot to write for “This Means War”. My personal fave song on this album for sure! With ‘Mayhem Without Mercy’ we have a fairly loutish and gruff song, somehow like the VENOM song it reminds of in the title. Both ‘Full Speed Ahead’ and ‘Brassknuckle Deathstrike’ walk a path in between the two aforementioned veterans, the latter refined with a cool guitar solo part again. The title track is another rowdy tune, and it’s just towards the end with ‘Let The Bastards Roar’ and the too stereotyped ‘Black Metal Slut’ that this album shows a little weakness, since these two are not of the same power or quality than the other tunes. Thankfully there’s ‘Once The Dust Hast Settled’ in the end… So, lovers of the rough side of classic Metal, spiced with some old school Black Metal and primal Thrash Metal won’t do wrong to check BULLDOZING BASTARD at: www.facebook.com/pages/bulldozing-bastard/452219264808259. You might or better should also visit their label: www.hrrecords.de