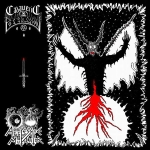 Splits can be a wonderful thing. You get a chance to try out new bands (assuming you’re unfamiliar with at least one of them). Sometimes the split simply includes songs that didn’t make the album. Other times, the tracks are recorded specifically for the split. Regardless, it’s a very Metal way to get to listen to two or more bands on one release. Poland’s CADAVERIC POSSESSION make up the first five tracks of “Influx Of Hatred”. Slav (guitars, bass, vocals) and Ketzer (drums) provide a raw, rugged Black / Death sound that needs a little more energy to it. The vocals in the opening track ‘The Call Of The Forked Tongue’ sound like he’s gargling razor blades. The guitar riffs are quite simple and the drums sort of plod along. ‘Crucify The Angels’ is thankfully more upbeat. The vocals, unfortunately, don’t seem to change much from track to track. ‘Elevate The Aphotic Prophecy’ is a bouncy number as ‘The Everlasting Corruption’ sounds like a surf party gone wrong. The final track ‘The Sinister Beholder’ keeps the blandness going. It’s not that CADAVERIC POSSESSION are terrible. They’re not. But somehow they seem held back and lacking… something. AGGRESSIVE MUTILATOR takes over with track six, ‘Efterbliven Som Herrefolket Vill’, an acoustic intro leading into ‘Den Svenska Rebellen’, a punked-up, energetic track with anarchic riffs and vocals that could have been born in the bathroom of a sweltering dancehall. Sweden’s Micael Zetterberg (bass, drums) and Mikael Holm (guitars, vocals) smother the senses with rapid-fire tracks such as ‘Anskramlig Profet Fran Den Gamla Onda Tiden’ and ‘Knivhuggarrock’. There’s a very in-your-face attitude with these guys that’s missing from the first band. But you know, that’s the beauty of splits. The eight tracks of AGGRESSIVE MUTILATOR are fairly consistent in their delivery and quite satisfying. Well, except for the little organ sound in the final track ‘Varldens Bottensats’. But it sort of adds character. So all is forgiven. For more info, check out https://aggressivemutilator.bandcamp.com, www.bestialinvasionrecords.com