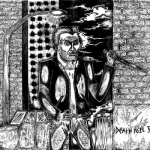 All those with a weak heart should read another review now! And all those, who are into technical stuff, should do the same. AGGRESSIVE MUTILATOR – the name sounds familiar, just like these guys were around as far back as the 1980s. But it was just two years ago that they started their campaign against technical music and lame bullshit. Mikael Holm started the band in Norköpping, Sweden. Surprisingly for a Swedish Metal musician, he is a guy without any musically notable past. During the last year, he was joined by drummer and bass player Micael Zetterberg (also in TERRORAMA, among others). The year 2012 saw them releasing no less than three demos and a vinyl 7" which was limited to 53 (!) copies. Another demo ("They Want To Cut Off My Head") was already released this year and so "Death Toll VI" marks their second release in 2013. These two are really hardworking guys. Within just estimated 30 seconds, the opener ‘Struggle To Survive’ shows the way AGGRESSIVE MUTILATOR walks: simple, raw and brutal Metal, somewhere between early European Thrash Metal (KREATOR e.g.), proto Death Metal like SLAUGHTER and Black Metal of the oldest school. Looking for elaborate music with technical finesse? Look somewhere else! AGGRESSIVE MUTILATOR don’t give a shit about musical skills or excessive songwriting. They just hit fuckin’ hard, directly in your face! The extremely short ‘Taste The Knife’ even has a touch of Hardcore, while ‘Phantoms Of Necrolust’ is more like a torturing slow grind in the vein of early CELTIC FROST. And AGGRESSIVE MUTILATOR know whom to pay tribute as well: ‘Massacra’ is a well done HELLHAMMER cover tune. That’s the way I like it! Don’t complain about the extremely raw, unpolished and pretty fucked up sound – anything else wouldn’t fit here. Visit: http://aggressivemutilator.bandcamp.com and see for yourself!