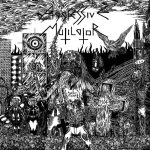 If you like Black Metal and ever feel like time travelling, consider AGGRESSIVE MUTILATOR a sort of Swedish Bill & Ted. They may be the last people you’d trust with theoretical quantum physics, but at least it won’t be a drag if you end up somewhere you don’t want to be. I suppose I could go on about how this duo is exploring some sort of Black Metal primitivism with their simplistic content, understated production and propensity for featuring brutish wood-cuts in their album art, but really they’re just ushering you into a time warp. Their sound seems to be longing for the span of time of fetal Black Metal. A genre frozen while on its way to full metamorphoses, shedding skins of harder Punk and even Thrash. Many of their songs channel early VENOM and even BATHORY as evident in ‘Eaten Up From Inside’ and ‘Warriors Against The World’. A lot of their sound and overall aesthetic seems to allude to a certain kind of naivety; it is almost as if they’re trying to create the feeling of when you first heard heavy and nihilistic music in your youth. If you think about it, the simple lyrics about "endless evil and darkness", the band logo that looks like something you would have drawn on a school notebook – doesn’t this remind you of someone? Perhaps certain moments of those times long forgotten where such antisocial things were comforting, they created a bit of insulation between that which you found so mundane and mediocre. Regardless of my romanticism, it is important to acknowledge the specific creative decisions that make AGGRESSIVE MUTILATOR so raw, nostalgic and a bit vulnerable. The vocals are unobscured, you can hear all of the lyrics whether or not you find them clever or deep (they’re not). Their subject matter doesn’t seem to stray far from misanthropy, death, paranoia and macabre fantasy. The delivery is rather uniform throughout; "Take your dreams, and turn them to nightmares!" is almost gleefully proclaimed as some kind of Metalhead battle-cry, a thematic maxim disinterested in details and nuance. Ultimately, these stylistic features yield a question of taste: you either like it or you don’t. There are more upbeat, punkier songs such as ‘Evil Child’s Laughter’ that signal a more stripped down MIDNIGHT and adhere to this simplicity. Some tempo changes in ‘Doorway To The Holocaust’ show the band’s effectiveness in both slower, looming interludes as well as a more frenzied pace. These variations are still subtle, however, and the simplicity of it all doesn’t give way for much exploring, but I believe that’s really what they’re aiming for. They’ve gone to the heart of the matter, the essence of what attracts us humans to heavy, misanthropic music and dwells there in that special place never to emerge. In this sense, it may cut right to your soul, or it may not, who cares, but you can never accuse AGGRESSIVE MUTILATOR of being overly complicated (the album was released as a cassette through Ljudkassett – Frank). More info at: http://aggressivemutilator.bandcamp.com, http://ljudkassett.bandcamp.com