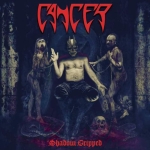 “Shadow Gripped” is the proof that sometimes band reunions are worthy of consideration and support. This is the sixth album recorded by the British band CANCER during their almost 30 years long career and it represents a perfect comeback to their glorious roots. Here we have the original line-up that in the early 90s released two of the most influential Death Metal albums ever: “To The Gory End” and “Death Shall Rise”. In detail: John Walker (guitars and vocals), Ian Buchanan (bass) and Carl Stokes (drums). Let me be clear, “Shadow Gripped” doesn’t reach the peaks of the two above mentioned masterpieces, but it’s an heir worthy of those classic titles and pure gold in a period full of mediocre Death Metal releases. This new album sounds like it was recorded in the 90s and blows away CANCER’s two missteps from 1995 and 2005: “Black Faith” and “Spirit In Flames”. Almost 44 minutes for ten tracks of putrid and sick Death Metal with some thrashy parts pretty reminiscent of “The Sins Of Mankind” and a bunch of morbid slowdowns that sound like a cross between AUTOPSY and BOLT THROWER. John’s riffs are simplistic, but still intensely catchy, violent and brutal. Each song definitely has its points of interest: sometimes groovy mid tempos and doomy parts, sometimes merciless and furious accelerations. All fits perfectly with the minimalist, but intense, rhythm section and also the vocals sound like an aggressive instrument in the purest old school British tradition (Mark “Barney” Greenway, Dave Ingram and Karl Willets come to mind). If I had to find a weak point in “Shadow Gripped”, I would say the cover artwork, mostly because I don’t like digital drawings and I used to link CANCER with their legendary “To The Gory End” artwork inspired by “Dawn Of The Dead”. What else can I say? The production has a strong Morrisound touch and the lyrics are a bloody, splattery and gory feast. If you’re into early OBITUARY, early GOREFEST, BENEDICTION, DESECRATOR, BOLT THROWER, AUTOPSY etc, don’t hesitate and get a copy of “Shadow Gripped”. To me this is one of the best Death Metal releases of 2018: yeah, CANCER fucking CANCER is back! www.facebook.com/goryend, www.peaceville.com