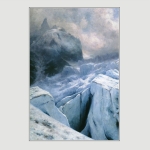 Like the Black Metal bands in Scandinavia, Quebec based outfit CANTIQUE LÉPREUX is inspired by nature, its beauty and wilderness, the album title means “polar landscapes”. So I guess it is understandable that the outcome is pretty much the same, although the Canadian forests, mountains and snow-covered landscapes possess their own character and charms. “Paysages Polaires” offers you eight tracks of Black Metal with a good sound and talented musicians who are well-known in the Canadian Black Metal underground and gathered experience in bands like FORTERESSE, CHASSE-GALERIE, MELEE DES AURORES and a few more. The opener is a traditional up-tempo blasting Black Metal attack but do not be fooled, CANTIQUE LÉPREUX has a little bit more to offer. Already during the second song the whole affair turns to Suicidal / Depressive Black Metal in all its mournful grief. The tempo is lowered, the guitars are repeating melancholic riffs (instead of producing a flow of aggressive, melodic attacks) and even the well-known shrieky vocals (more crying than singing) have their appearance. But then, with another twist, the third song comes up with mid-tempo / fast Black Metal in the vein of MARDUK, EMPEROR, DARK FUNERAL. This interplay is taking place during the whole playing time and I am not sure, but this blend of traditional Scandinavian and Suicidal Black Metal is pretty unique. Both styles are well-played and exercised with precision and dedication, I guess the band could have recorded both a traditional or Suicidal Black Metal album, but instead they intermingled it with both sub-genres divided equally during the playing-time. If you like both styles, you may like it. But as always, when two different style are mixed, some people dislike such a blend. So discover for yourself by visiting www.facebook.com/cantique-lépreux-1508635429464649 or www.eisenton.de