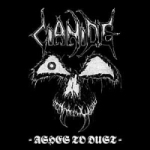 CIANIDE
Ashes To Dust
(From Beyond Productions / Displeased Records)
119:19min

Since their origin in 1988 Chicago’s CIANIDE has been working with no less than 10 different companies (so far) and released five full length albums ("The Dying Truth", "A Descent Into Hell", "Death, Doom And Destruction", "Divide And Conquer" and "Hell’s Rebirth"), five splits (with NUNSLAUGHTER, MACHETAZO and COFFINS as well as being part of "Chicago Metal Hell" and volume 3 of the infamous "Headbangers Against Disco" series), one EP ("The Truth"), a best of ("Dead And Rotting") and a live in the studio album, plus contributions to the "In Memory of CELTIC FROST" and "Tribute To TWISTED SISTER" compilations. So you definitely can’t accuse them of being lazy bastards, that’s for sure. For all those of you who enjoy the regular album releases as much as I do, here’s an additional double-CD-set to complete your collection. "Ashes To Dust" was already released back in 2006 and comprises all official demos that this Chicago based old school Death Metallers recorded between 1990 and 1999. In detail this means: "Funeral" (1990), "Second Life" (1991), "Kills" (1993), "Rage War" (1996) and the "Promo 1998" plus four previously unreleased demos (from 1993, 1994 and two from 1999). 28 tracks in total! The whole release showcases the band’s musical evolution very well – from a very doomy act (best reflected on disc one), to a way stronger and musically more matured, very cool old school Death Metal unity with obvious influences from old CELTIC FROST and MASTER. There’s even some elements of Black Metal to be found in the previously unreleased track ‘Morbid Restitution’, which they recorded during the same session as their debut demo. "Ashes To Dust" was released in a limited edition of 1.000 copies and is already sold out from the label, but you still might be able to find a copy through some mailorder sources here and there. Of course it’s not necessarily a "must have" release for a CIANIDE starter (all those of you better check out the regular albums first), but a cool release of historical value nevertheless. For further info check out www.myspace.com/cianidekills, www.displeasedrecords.com