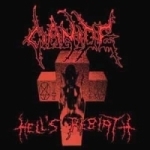 If I counted correctly this is Chicago old school Death Metal maniacs CIANIDE’s fifth album and it marks the debut for Dutch From Beyond Productions. As on all previous releases the band still offers old school Death Metal in the true sense of the word: doomy mid-tempo passages in the vein of HELLHAMMER / CELTIC FROST (I would definitely name classic MASTER here as well! – Frank) are combined with straight faster, even blasting passages and traditional growls creating a simple yet driving mixture of late 80s, early 90s inspired deadly Metal. Sure this is a band not wasting time with experiments and they do not belong to these retro – HELLHAMMER – worships that emerged the last couple of years, but perform this style since 1988 without ever straying from this path. It’s comparable with NUNSLAUGHTER’s development but with the single exception that CIANIDE did more albums and not as many demo and EP releases. But back to “Hell’s Rebirth”, nine new songs (not to forget the cool cover of the old DEATH classic ‘Infernal Death’ as a “hidden” track! – Frank), a powerful guitar and drum sound, crushing heaviness en masse, but also vocals that are somewhat drowned in the mix and do not create the same force as the music. Actually that’s pretty sad since otherwise this is a pretty good and entertaining album, there are some good riffs, some good songs but the vocals remain one-dimensional, monotonous and simply boring. That’s definitely the greatest weakness on “Hell’s Rebirth”, musically it’s cool, but there’s this lack of aggression and coarseness in Mike Perun’s voice which is increased by the way the vocals are mixed. He has not changed his vocal style, not at all, but they sound powerless and that’s quite disappointing in my opinion. I’m always pretty fussy when it comes down to vocals, so don’t let this personal criticism keep you from checking out CIANIDE at all, such a persevering band deserves support and give it a try once you come across it or take a listen to the MP3 of ‘World Abyss’ available at www.cianidemetal.com. The label can be found at www.displeasedrecords.com