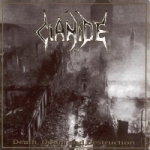 CIANIDE were never as renowned as MORBID ANGEL, but they were obviously good enough to pound through the mid-90s, whereas countless other, equally proficient bands disintegrated in the decidedly anti-Metal atmosphere. CIANIDE released “Death, Doom And Destruction” in 1997, a year that for obvious reasons will not be remembered as particularly interesting, though we did see the rise of HAMMERFALL. Despite CIANIDE’s average songwriting, their refusal to stray from their original influences is tremendously encouraging, and given the year of “Death, Doom And Destruction”‘s release, CIANIDE could have probably contended for the top. This album is brutal, as a Death Metal album should be. However, it is not brutal in that the blast beats are incomprehensible, and the vocalist sounds like he has a wet french roll lodged in his wind pipe. The brutality lies in the mood, the atmosphere. In CIANIDE’s case, that atmosphere is a mix of the Swedish style, AUTOPSY and MASTER. In fact this re-release contains a cover of MASTER’s ‘The Truth’. They may not have pushed boundaries, but they most certainly helped remind people in a dark age of a better time. www.myspace.com/cianidekills, www.razorbackrecords.com