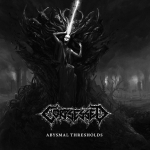 After 2 EPs Finnland’s Death Metal horde CORPSESSED will unleash their first full length over us in February 2014 via Dark Descent Records, who once again proof their brilliant taste in underground music. I am very impressed with this material. Dark gloomy Finnish old school Death Metal in modern sound interpretation. After a short typical intro, "Abysmal Thresholds" starts with speed changing Death Metal, varying between fast and slow speed, nearly doomy Death Metal, influenced by old masters like FUNEBRE, AUTOPSY, ABHORRENCE, CONVULSE or even INCANTATION. Their music comes up with deep guttural growls and screams mixed in a way, that the vocals are part of the whole musical concept but not the dominating force. Their style is old school but sounding very fresh and modern due to the good and professional production. Decent used keyboards in the back of some tracks really create a dark atmosphere and make the tracks sound like the soundtrack to a new Rob Zombie movie. Fast drumming, pounding double bass, typical Scandinavian 90s guitar leads and the dark and haunted growls really make this output an enjoyable journey back to the good old days. All songs are on the same high quality level, but ‘Demoniacal Subjugation’, a groovy Death Metal hymn reminding of good old AMORPHIS, is a good taster to this album. If you still can not get enough of old school stuff, than go and get this first masterpiece of 2014 after its release. More info at: www.facebook.com/pages/corpsessed/137045663007613, www.darkdescentrecords.com