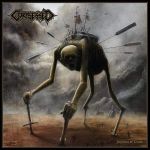 CORPSESSED from Finland return with a second album, four years after their debut and they remain formidably valid bearers of the torch of Finnish Death Metal. Beginning with an ominous, Lovecraftian mood-setting intro, their muddy old school production invoking primordial Death Metal times, theirs is a brand of gloomy, leaden music with extreme weight, moving within the realm of fellow countrymen CRYPT OF KERBEROS, DEMIGOD or PURTENANCE. The lyrics are about morbidity, impending apocalyptic events, and almost surrealistic landscapes such as the one in the cover artwork. Everything sounds as if it had been created and recorded in the early nineties, with abusively downtuned strings and guttural vocals. Often very doomy, interspersed with speedier riffs, the instruments deliver beautifully. The drums are like the heartbeat of a whale running an obstacle course, the guitars are precise and often flirting with fine solos, and the bass is very much present and doing its own thing. Often the double guitar work is stunning, such as in ‘Forlorn Burial’, a monstrous track. Like a huge cylinder grinding its way ever onwards, CORPSESSED’s pace is unstoppable, and most important, "Impetus Of Death" is full of great, kickass songs, closing with the ten-minute monumental ‘Starless Event Horizon’. An accomplished and awesome album. If you are into old school Death Metal and want to check whether there are any newer bands still able of doing it the right way, you should definitely not neglect this one; proceed to www.facebook.com/corpsessed, www.darkdescentrecords.com