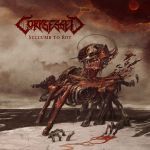 Back in 2013, I got a pack of 7″ EPs from a trade. One of them had a really good black and white cover and two awesome Finnish Death Metal songs. That was CORPSESSED’s self-titled second EP. It became one of my favorite releases back then. And so did their following three studio albums. And now, ten years after that EP, they have released their fourth full length album, “Succumb To Rot”. The band has kept a stable line-up, except for their bass player, so the main concept and drive they started with has been kept intact for this long. They do have that Finnish touch, so to speak, when it comes to twisted, bowel churning extreme music. Add to that these guys have grown exponentially as musicians and composers. So, “Succumb To Rot” is simply one massive, humongous and dense Death Metal album with a relentless urge to crush your skull (and soul). It features an amazing mix of guttural growls, sick and punishing bass tones, pounding drums and a sharp wall-of-distortion dual guitar attack. There is no way any self-titled Death Metal fan could pass this album out. I think the vividness of this collection of songs relies on the constant variation, crossing from one bridge edge to the other when it comes down to their influences: from Black Metal to Doom Metal to Thrash Metal et al. Yet, all grounded in a frenetic and unrelenting style of Death Metal that creates a tense and evil atmosphere. Performance wise, as mentioned above, these guys have gotten a lot better with their instruments and it shows. There are nuances everywhere. The more you listen to the album the more details you’ll discover. Jussi-Pekka’s drum work is sharp and precise. He is not just blasting away or using a lot of double kick drum patterns just for the sake of it. He knows how to let the songs breathe when they need it. Toumas’ bass pounds its way through the album, keeping the rhythm section tight and grounded. Niko and Matti have gathered a huge amount of solid, yet technical guitar riffs, including plenty of deviant melodic / harmonic parts, vast open chords and aggressive riffs on tap. Finally, Niko’s vocals have mutated into a deeper kind of growl but also altered often to fit the temper of each song as fit. The production is punchy and clear yet not overproduced or sterilized. It has enough swamp like organic slime to keep you entangled in their rotten roots. Mix wise, the instruments and vocals are not on top of each other, but multi-layered in different spaces to fill in all possible aural escapes. I do think the mastering may be a little pronounced. But that’s just me. All these elements help create a multi-dimensional, brilliant Death Metal album. I just cannot recommend it enough. Just go ahead and get it. You won’t regret it. Contact and follow the band at www.facebook.com/corpsessed and get their stuff here: www.facebook.com/darkdescentrecords