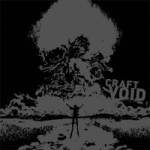 After a six year album hiatus, Sweden’s CRAFT have returned (well it has been out since August 2011) with a new slab of old school Black Metal in the form of "Void". Raw, cold and full of darkness are just a few of the words that describe the new album. As a matter of fact I would have to say that it reminds me of some old school SATYRICON, DARKTHRONE and BURZUM. While I was let down a bit by their last effort "Fuck The Universe" it is good to see that CRAFT have taken a step in a better direction and have made a nice follow up to 2002’s "Terror Propaganda". Not to say that "Fuck The Universe" is not a good album, but I think it was missing something. The riffs, songwriting and musical compositions on this album are amazing. Each song stands on its own which is something that is rare to see nowadays. The production is done very well but keeps a bit of the kvlt-ness sound. ‘Serpent Soul’ is a cold brewing track that gets things started out. The track is mid-paced and is a head banging delight. From the start the guitar riffs are what stood out for me. The drums keep shredding in the Black Metal form and the vocals compliment the songwriting. ‘Come Resonance Of Doom’ is where the band expands its songwriting abilities and not only demonstrates the diversity they have but also shows they can keep a good melody. ‘The Ground Surrenders’ is a thrashy piece that keeps the coldness of music and provides some heavy guitar work. Mesmerizing and trance-inducing riffs make this song standout as one of my favorites from this album. ‘Succumb To Sin’ continues where ‘Come Resonance Of Doom’ left off and has the nice tremolo picking while following the recipe of dissonance. A sick guitar solo happens at the 4:02min mark and kicks it up a notch for the song before ends. ‘Leaving The Corporal Shade’ starts out with a doomy guitar riff and slowly leads you into a sludgy melody. Quite an epic track for those into Doom Metal and helps the album stand out by having a different approach. We change speed with ‘I Want To Commit Murder’ a blitzkrieg speed song that lives up to its title and unleashes some signature sick guitar solos. The drums are blasting and providing the necessary ammunition to assist with the song’s execution. ‘Bring On The Clouds’ and ‘Void’ finish up the album with the same ferocity and intensity has demonstrated in the previous tracks. Clearly CRAFT are one of the bands that are carrying the torch of Black Metal. This album is worth the price of admission and worthy of a spot in the CD collection. The band has the duende to keep the listener’s attention and floods with musicianship. For more info: www.myspace.com/carnalrecords, www.myspace.com/craftblackmetal, www.facebook.com/craftblackmetal