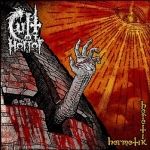 Just take a look at the band member’s nicknames and you will get a rough idea of what the music sounds like. William “Pazuzu” Nadler (vocals), Rodrigo “Doom Hammer” Giolito (guitar), Diogo “Dyd Bastard” Cabral (bass guitar) and Gabriel “Bitch Hünter” Cabral (drums). Like on their debut “Babalon Working” (2016), the band from Brazil is following the path of the first wave of Black Metal, namely VENOM and HELLHAMMER have a huge impact on the nine tracks. Some people have characterized CULT OF HORROR as blackened Speed Metal, but that is not all. In fact the band, especially the songs on the second half (the B-side, so to say) have a huge tendency towards Doom Metal. One matter surprised me a little, the fact that the songs are missing energy, force and strength. Somehow it sounds, at least to me, like the band is playing with the handbrake on. Even the faster songs develop slow and predictable. Maybe something went wrong during the recording or mixing process, but vocals, (bass)guitar and drum sound like put together from the construction kit. Usually the sum is more than its parts, but in this case the whole affair does not really sound homogeneous. There are some riffs DARKTHRONE would have been proud of, but the overall impression of “Hermetik Heretic” is rather average. Some good moments can not equal the overall impression of an album which is missing the feeling of being forged as it was made of one piece. Interested readers and fans of the first wave of Black Metal may visit www.facebook.com/cultofhorror or www.bestialinvasionrecords.com for further information.