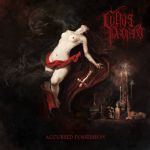 When you are traveling on different channels you sometimes stumble upon a band more than once. Two Black Metal faces in front of a Californian blue sky? Here, take my attention. Then I saw their cool atmospheric artwork (I love those colors) on some Debemur Morti advertisement and finally read their name on the SADISTIC INTENT Facebook page. Ok, ok, I get it: time to check them out! CULTUS PROFANO is a two ghoul band, one man, one woman (I mention that because since JUCIFER I like this combination a lot). They are hailing from California and formed in 2016, released a demo and a full length in 2018 called “Sacramentum Obscurus”. Her name is Strzyga and she does the vocals and the guitar work and Advorsus aka Arthur Mendiola, drummer of mighty SADISTIC INTENT, plays drums and does vocals as well. So much for the facts – my expectations are high, let’s hear it! What we get is Black Metal, well produced, well played, well written, a lot of old references from the Norwegian boys, early SATYRICON, GORGOROTH, BURZUM, GEHENNA or from Swedish ones NECROPHOBIC and early MARDUK. Everything nicely wrapped in a clear and modern sound (the bass drum sounds a bit too triggered for my taste, but that is just a minor thing, the guitars shred). This is not exactly original, no. But CULTUS PROFANO are good enough, talented and experienced enough so that should not bother you. The variety of the songwriting is high and the quality of the riffs and beats is there. Especially Strzgya’s vocals stand out, they are vicious, hateful and have a great demonic timbre. You can feel that their hearts belong to the 90s and the darkness surrounding that era so they convincingly carry that spirit with them. ‘Devoted To The Black Horns’ for example is a beast of a song, a compilation of Black Metal in itself, starting with a BURZMesque riff, turning into old SATYRICON blast mode, hailing ENSLAVED with epic melodies and stomps, cruising down DARKTHRONE boulevard with galloping horses, then its blasts again, embracing EMPEROR’s majesty (sans keyboards) on the next corner and riding on with some MARDUK worshipping blasts and double bass. And then the song is not even half finished! All that in a good flow – quite enjoyable. I really cannot tell you more. If you are looking for the next thing leading into the future: this might not be it. But if you are still haunted by the spirit of 90s Black Metal from Northern Europe: this will give you a great sense of coming home. More info at: www.facebook.com/cultus.profano, www.facebook.com/debemurmorti