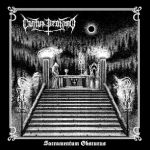 “Sacramentun Obscurus” is the first full length album by the Californian band CULTUS PROFANO. Almost 42 minutes for nine songs of intense and evil Black Metal, the way it should be played. The album is released by the French label Debemur Morti Productions in CD, digital and vinyl format. Here we have a very talented band that was founded only three years ago by Strzyga (vocals and guitars) and Advorsus (vocals and drums); this latter also plays with SADISTIC INTENT. Despite being an American band, CULTUS PROFANO don’t sound like a typical Black Metal act from USA. I mean, what would you expect from a US Black Metal band? The grinding rawness of PROFANATICA? The thrashy technicality of ABSU? Or maybe the brutality of THORNSPAWN? Well, “Sacramentum Obscurus” is a very violent and brutal example of Norwegian Black Metal from the 90s, but it comes from Los Angeles. A freezing and gloomy non-stop assault of orthodox Norwegian Black Metal. Bands like IMMORTAL, DARKTHRONE, SATYRICON and GORGOROTH come to mind with their early classic titles: “Diabolical Fullmoon Mysticism”, “Pure Holocaust”, “Under A Funeral Moon”, “Transilvanian Hunger”, “Panzerfaust”, “Dark Medieval Times”, “The Shadowthrone”, “Pentagram” and “Antichrist”. The whole album is filled with a very mystical and blasphemous atmosphere. CULTUS PROFANO don’t only focus on high velocity, but they strike the right balance between furious blastbeat accelerations and more evocative mid tempos. There are tons of icy and dark melodies that, coupled with the typical Black Metal sinister and agonising screamings, are able to create an occult and misanthropic aura. The same evil and dark spirit is perfectly depicted in the front cover artwork. So, if you’re into the above-mentioned bands, this is a mandatory addition to your collection. “Sacramentum Obscurus” is a jump back to the early ‘90s, when this kind of sound started a revolution in the extreme Metal scene. www.facebook.com/cultus.profano, www.debemur-morti.com