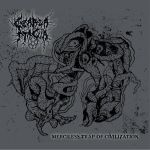 CZARNA MAGIA, a Black Metal one-man band from Poland, attacks the listener with full-length number two. Some people say that the second album is always something special, because it decides where the musical career leads to. I personally do not agree with that thesis. For me it is more like sports, where the next game is always the most important. But back to “Merciless Trap Of Civilization”, which features seven tracks, the last one ‘Liminal Gnosis’ with its nine minutes is a bit longer, but all other songs are clicking at five to six minutes. The perfect playing time for each track to unfold the style of Black Metal that Balrog (the person behind CZARNA MAGIA) has in mind. While the first release, the EP “Inwokacja Pierwotnej Mocy”, was heavily influenced by the earliest days of the second wave of Black Metal, with this release the path that the band has taken on their debut “Voracious Demons Of Megalomania” is continued. The riffs tend more to Death Metal and even eighties Heavy Metal, the song-structures are plain and simple, yet without being boring or dull. And the vocals, although still pretty raspy, have more in common with singing than grunting or shrieking. In fact, at some moments the listener is able to understand the lyrics. If you look at the whole package you inevitably come up with a blueprint and that is DARKTHRONE during the begin of the millennium with albums like “Hate Them” or “Sardonic Wrath”. So CZARNA MAGIA definitely left the realm of Black Metal behind and are developing an unique style,which is hard to pin down. A mixture of Black and Death Metal but with, regarding the guitar work, a huge influence by obscure eighties underground Heavy Metal. If you like this special blend, you will definitely like this output, especially since the latest DARKTHRONE album “Eternal Hails” was pretty lame for my taste. So “Merciless Trap Of Civilization” may be an alternative for all listeners who like albums which exceed the borders of Black Metal in the direction of cranky Heavy Metal. More information can be found here: www.facebook.com/czarna-magia-2337773046454049, label contact via theendoftimerecords@gmail.com