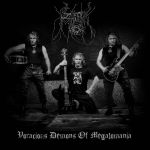 This Polish one man band named Black Magic, if we translate the name from the Polish CZARNA MAGIA to English, has been aroud since 2017 and released the first chunk of sound last year, with the EP “Inwokacja Pierwotnej Mocy” which is quite raw and ragged, with some good moments though. Those moments has Balrog taken with him, while writing the new album “Voracious Demons Of Megalomania”. Balrog is delivering classic Black Metal carved in the Scandinvian vein, a good mix of old deeds and the second wave of Black Metal, delivered mostly midpaced and quite heavy, with a great mystical and dark atmosphere to it. There is a great nostaligic feel of Scandinavia anno the mid-nineties over the atmosphere and some of the built ups, and that isn’t all that bad! The songs are well written, quite catching and delivered within the right atmosphere and darkness. If you miss the good old times and you’re in for a nostalgic kick, CZARNA MAGIA is where to look. It took me a couple of listens to get under the skin of this release, though then it started to open and take me back, when most music was alive and exciting! Enter the cursed realm of the winterdemons: www.facebook.com/czarna-magia-2337773046454049, https://czarnamagia.bandcamp.com