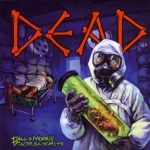 It’s time for some Death Metal history again. Hailing from Tampa, Florida, DEAD (not to be confused with the German band of the same name), are around for a felt eternity. Their first demo "Musical Abortions" dates from 1986, but even though they never really split up, there aren’t much releases in their discography. Asides from three demos in the 1980s, the three- (for some time four-) piece released three EPs, a studio and a live album and a demo compilation. Now Area Death Productions from China, always dedicated to old school stuff and so called cult bands from the 80s, re-released the studio album "Gross Abnormalities", originally released in 2006, and the demo compilation from the year 2000 as a double CD under the title "Hell’s Morbid Disciples Of Hate". And I don’t really know who should be buying this. I mean, "Gross Abnormalities" is really unpolished Death Metal on the edge of Grindcore more than once, on the other hand, the stuff sometimes is so chaotic that it is hard to find an access to it. In the best moments, riffs and pieces remind of HELLHAMMER (like in the opener ‘Worm’) or early AUTOPSY, yet they lack of those special moments these bands had to offer in their songs. The most exciting thing sometimes seems to be the fact that vocalist Belching Snotsucker is Suzy Solar in real life. Honestly, if I didn’t knew, I’d never thought that those bestial vocals were done by a girl. I sometimes didn’t even believe they were human anyway. And the always changing quality of the sound doesn’t make it easier for me to find access to DEADs only album. But hey, that’s not all the stuff on this double disc. Disc 2 features the "Dead – Necrology" compilation that included all the demos DEAD recorded. The "Musical Abortions" demo from 1986 starts off with way a too long intro. After that we have four noisy eruptions, which might have been revolutionary in 1986 and somehow were "cult" for a few years, yet these recordings are unbearable in 2013. Hardcore influenced blasters, that remind me of those LETHAL AGGRESSION demos from that era – in the 9th or 10th copy, qualitywise. You can hardly imagine that DEAD used instruments for this instead of throwing stuff down the stairs and record that. The ten songs from the second demo "Raw Sewage" from 1988 weren’t recorded in a much better quality. Varying from short outbreaks like ‘Spit’ to long songs with enervating ideas like in the unhearable ‘Maggot Phlegm’ or the sick ‘Bar-B-Q Pope’, DEAD did their best to ruin my nerves and ears. Only the funny shorty ‘The Saga Of Alien Fish, Part 12’ makes me smile a little bit, reminding me of SPAZZTIC BLURR somehow. But the completely destroyed SEX PISTOLS tune ‘No Feelings’ wipes the smile off my face in no time at all. Finally we have the third, untitled DEAD demo from 1989, the first with Suzy Solar on vocals. On this demo, her vocals are not as bestial as on the album. The demo featured the band classic ‘Comet For My Vomit’ as well as some re-recorded songs from "Raw Sewage". But this re-recording won’t make songs like ‘Maggot Phlegm’ a little bit more enjoyable. The quality of the recordings is a little better this time, so we have the first quite hearable songs here. And a mini hit with the punky ‘Of Corpse’. As a "bonus", the disc features three live tracks that sound like they were recorded in the toilet of the club while DEAD played inside the club. Absolutely meaningless. But, yeah, I somehow survived those 30 songs from this disc – with bleeding ears. Believe me, I’m far away from being a sound fetishist, but those recordings are too much over the edge of audibility. Masochists might need this stuff and check: www.facebook.com/pages/dead/127082430667384, or the label: http://adp.areadeath.net