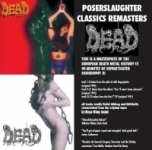 Between 1991 and 2001 these German sickos were releasing stuff like crazy. No less than five 7" EPs ("Defeat Remains", "Slaves To Abysmal Perversity", "Wanted For Kinky Sessions", "Orgasm Through Sleazy Vibes" and "Saturday Grind Fever"), two split 7" EPs (with GUT and MEATSHITS), a split CD with REGURGITATE, two demos ("Far Beyond Your Imagination" and "Slaves To The Abysmal Perversity") and two full length albums ("You’ll Never Know Pleasure – Until You’ve Tasted Pain" and "V.I.P.") saw the light of day. Additionally a compilation CD ("Les Stars Du Rock Porno"), which a.o. features a lot of the just mentioned EP / demo stuff, was issued after DEAD’s temporarely split-up in 1998… And now we have this "Poserslaughter Classics Remasters" CD, which is basically another compilation release, that comprises of the complete "You’ll Never Know Pleasure…" album, the eight songs off the split CD with REGURGITATE as well as the two tracks from their first 7" EP. Soundwise this is far more impressive than the original releases though, due to the fact that everything got successfully remastered for this special release. Especially the split CD stuff sounds incredibly crushing now and is definitely the highlight on this release! Even though the band could easily be associated with the Porn-Deathgrind genre (due to songtitles, coverart and intros they use), I never really had a problem with DEAD because musically you (luckily) don’t recognize that too often (apart from a handful of intros maybe). So, even those of you who share my views can still enjoy them nevertheless. At the end of the day this is nothing but extremely well executed, totally raw and straight ahead grinding Death Metal of the most brutal kind. Kinda like a mixture of old SweDeath, early CARCASS and classic AUTOPSY. In the meantime DEAD has reformed (after having already played a one off gig in 2001 as LES STARS DU ROCK PORNO) and a new release is currently in the making. And the best way to get in the right mood for it, is first of all to check out this approximately 90 minutes effort! So, don’t hesitate to contact poserslaughter@bossmail.de for ordering information. Band contact: xxlcunt@freenet.de