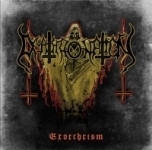 The 2006 demo "A Soil Forsaken" was already a promising first sign of life by these Bavarian Death heads. Sure, the demo was nothing too exciting but it was a solid piece of raw old school Death Metal. The debut album "Exorchrism" is a huge step forward and presents a grown band. The music is still raw, filthy and brutal as fuck but the songwriting improved a lot. The production of this recording sounds also really old fashioned and I mean this in a very positive way. "Exorchrism" has a fucking raw and bloody but really powerful sound. The guitars sound like chainsaws soaked in blood and the vocalist seems to be an archaic demon from the bottomless pits of hell. Maybe this isn’t the most original stuff but "Exorchrism" definitely kicks ass. In my humble opinion 27 minutes plus a short acoustic instrumental is not an appropriate running time for a full-length album. One more song would have been cool. Nonetheless, "Exorchrism" is a remarkable album of relentless old school Death Metal with an ancient, evil and blasphemous vibe and performed with the right attitude. Don’t miss this. www.deathronation.de