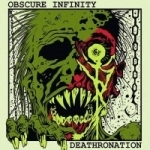 On this sweet 7" EP German Death Metal bands OBSCURE INFINITY and DEATHRONATION have teamed up to deliver us two exclusive recently recorded tracks not available elsewhere. Does that mean both songs suck too hard to be included on their regular releases? Hell no! Both songs underline that these bands are fine servants to the cause of death and whereas many split EPs tend to offer one good band and one bad band that’s being pulled through by the prominence of the A-side this split here provides no downer on neither side. OBSCURE INFINITY melt Scandinavian melodies with a raw aggression not unlike Dutch legends ASPHYX or THANATOS, driving riffs, Jules’ trademark throaty vocals and speedy attack that will kick your butt within a nanosecond. Unfortunately, the lengthy guitar solo sounds a bit squeaky in my opinion, but ‘Absurd Existence’ (recorded in 2010) is still a good and enjoyable track. DEATHRONATION are my faves on this piece of wax due to sending respectful nods to the American old school sound which I love most of f**king everything! Especially SADISTIC INTENT shine through in ‘Vulture Eyes’ (recorded in 2012) and also fans of South American acts like MORTEM or OMISSION should instantly hail this. The track builds up slowly around a nice, Cortez-tribute solo before picking up speed, blasting away in the middle before getting really stomping and crushing. Stiff Old’s rotten vokills slay as well, reminding of the mighty Californian Death brigade, too. Morbid Metal the way it should be and reason enough to get this EP. Rounded off with a nice, primitive cover reminding me a bit of the first REPULSION album in terms of putrid colouring, this EP should be a very welcomed addition to every Death Metal maniacs’ collection of blood! Order it at the following sites: www.ironbonehead.de, www.whispers-of-death.de