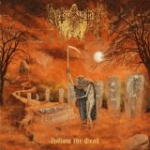 These days it seems solid to killer Death Metal (mostly of the old school-ish kind) is being dropped on us as regularly as IS barrages on the poor people in Kobane (the opening track ‘Deathchant Assyria’ inspired me to this tasteless comparison, sorry p.c. folks)! While a lot of releases prove to be forgettable after serious testing, “Hallow The Dead” – the first proper album by Germany’s DEATHRONATION – turns out to be a remarkable full-length debut. Though some more roar-a-long hooklines could be worked upon on future releases, the band’s approach somewhere between thrashing early US Death like POSSESSED, DEATH, or fellow German legend MORGOTH, expanded with gloomy and atmospheric moments courtesy of ASPHYX or AUTOPSY sounds just perfect to me and is nicely varied with some blasting fury, too. Due to vocalist / guitarist Stiff Old’s undeniable Teutonic accent – even the Tardy / Grewe like vocals can’t hide that – this simply “evil” flair of SODOM’s “Persecution Mania” haunts these songs as well. Just like bands such as SADISTIC INTENT or MORTEM (Peru), DEATHRONATION create intense, diverse yet utterly traditional Death Metal with some darn good twists (e.g. the female spoken section in ‘Spiritual Relief’ and some melodic soloing throughout the record) and the quartet sports a nonchalance and self-confidence unusual for a relatively new band. Add to that a fabulous, morbid cover artwork and honest, vigorous production, “Hallow The Dead” sticks out of the mass of “new old school” attacks as an album destined to be listened to again and again. Doubtlessly, the German Death Metal scene is raging and “Hallow The Dead” is another crushing example, hopefully consuming the souls of many maniacs worldwide. Hear a song here. Get it here. German folks should not miss the release show at Oberhausen’s Helvete on October 25, 2014. Look forward to an interview on this site soon! More about DEATHRONATION at www.deathronation.de or www.facebook.com/deathronation