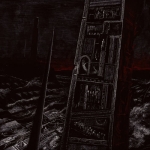 Lying in bed with a summer flu, suffering from both, hot temperature in- and ouside and the flu itself is really no fun, so it took me some days longer than expected to start and finish this review. Currently I am a bit disappointed with the Death Metal releases as hardly any new stuff can capture my attention very long and most stuff is mid-class material. The total difference goes for Black Metal nowadays as the new wave of Black Metal bands really deliver pretty outstanding stuff and the new releases from MISTHYRMING and BATUSHKA (the Drabikowski one) really are full of creativity and things to discover what demands several spins of each album to explore its full intensity. Same goes for the new DEATHSPELL OMEGA album entitled "The Furnaces Of Palingenesia". The album sounds accessible at the first tunes and maybe it is more accessible compared to their old stuff but still far too complex to get into it with just one round. Parts of the album are as mentioned accessible while most parts are pretty thick and difficult to get into. What immediately caught me is the cold and harsh atmosphere paired with dissonant guitars which are disturbing in a very catching way as the gentle listener wants to get through this to enter this world. Mentioning any single track would do the album wrong as it needs to be reviewed as a whole concept work but ‘1523’ can be mentioned as a pretty fine taster for this masterpiece. Productionwise they did all right once again and the clear and very powerful and grim production gives the chance to check all hidden details from spin to spin. Mentioning their fantastic musical skills is superfluous. Recorded live (whatever that means nowadays) seems to be a good thing to do. I also will not consider to think about who might have done the vocals as listening to Black Metal nowadays is more sketchy than ever considering any political idiologies. DEATHSPELL OMEGA delivered once again one of the best Black Metal albums for the current year and are definitely a class of their own. I guess everybody into Black Metal already gave this piece of extreme art and beauty a spin. If not, check them out via one of the following sources: www.noevdia.com or https://deathspellomega.bandcamp.com.