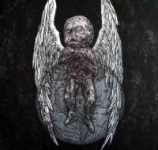 Well, this is truly a monumental album as its title already suggests. The French extreme Black Metal band DEATHSPELL OMEGA is active since the mid-90s and walked upon raw, DARKTHRONE-inspired Black Metal paths on their previous releases, but with "Si Monumentum Requires Cicumspice" the definition of DEATHSPELL OMEGA’s sound has to be rewritten! Of course you still hear the Nordic elements but the band has developed a lot further in all respects of their musical and lyrical appearance and evolved from straight and simple sounding standard Black Metal into frightening mighty and dark Black Metal "art". DEATHSPELL OMEGA now belongs in the same category as their label mates FUNERAL MIST and WATAIN and actually sometimes sound like a mixture of both of them. The 70 minutes of music offered on this album are well-produced and perfectly blend supreme heaviness, deeply anti-religious lyrics and searing Swedish Black Metal melodies. Unfortunately due to the excessive running time "Si Monumentum Requires Cicumspice" wears off a bit after two third of the album and does not have the surprising effect the N.E.D. bands I mentioned above had, but it is still a very good piece of grim, powerful Black Metal offering both quality AND quantity. For more information visit www.noevdia.com.